Still in the mountains for the holiday weekend, feeling totally and completely lazy. Mission accomplished. As my hubby remarked last night, he was “exhausted” from moving from his comfy chair to the porch to the puzzle with a snack pit stop in between. That’s the way we roll when we are hanging at the mountain house by ourselves. Full confession, some days I never get out of my pjs. Don’t judge me.

The other glorious thing about being up here for a few days is the ability to sleep in. Today it was about 9:00 before we stirred. We sleep with all the windows open and the mountain breeze drifting through. Heaven! The atmosphere just weaves a spell on us. At home we have a beloved cat who makes most of our mornings start way too early. She has a very aggravating habit of pouncing in the middle of our bed, taking one extremely sharp claw, and very precisely pricking an arm or leg. She likes to start this torture around 4:00am. And usually by 5:30 she’s accomplished her goal of getting someone up to feed her. She does NOT get to join us in the mountains. 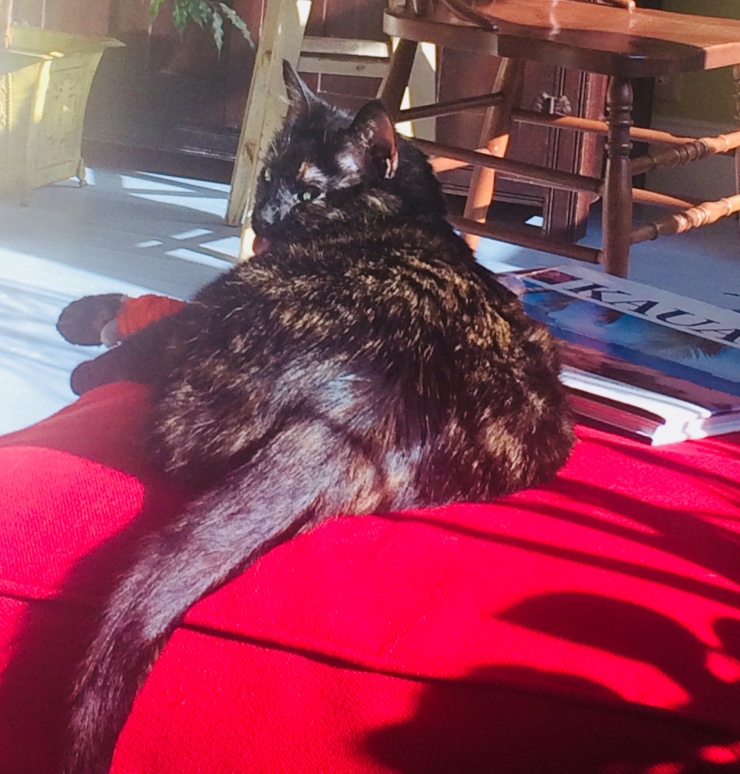 What’s so funny about all this is that said kitty actually adopted us at our cabin. Several summers back she wandered onto our deck and loudly proclaimed her desire to come inside. Feral cats aren’t uncommon up here. And they can quickly multiply. One of our hillside neighbors used to feed them and provide a warm porch in the winter. This one seemed more like a cat who had been abandoned.  We had deliberately avoided any cat fraternization since we already had one at home and no desire for more. But this one was persistent. We actually tried to ignore her for one whole weekend, but when we came back the following weekend….there she was. Darn!

My parents were with us that second weekend and of all people my daddy decided to befriend the cat. He doesn’t even really like cats! But I think he was feeling sorry for her and managed to coax her close for a head stroke. This went on a couple days until I knew I was in trouble. Hubby had gone home at this point, so he wasn’t there to talk me off the ledge. A trip was made to the local Walmart for a kitty carrier and Tizzy (because she had me in such a state) was on her way to the city with us.

“WE CAN JUDGE THE HEART OF A MAN BY HIS TREATMENT OF ANIMALS.” Immanuel Kant

First stop, our vet. After a thorough check she was found to already be spayed. What?! We thought she was a stray. But to our horror she also had a hole in her stomach where she had been shot with a B.B. gun. At this point my husband, who is really a great big softie, was won over. He can’t stand the idea of anyone hurting a defenseless animal. Tizzy was now ours, much to the distress of our other, older cat, Minnie. She was less than pleased to share her humans with this interloper. They lived several years in the same house with very little interaction except the occasional snarling encounter at the top of the stairs.

Today Tizzy rules the roost alone since we lost our sweet Minnie last summer at 12 years old. We actually tried a time or two to bring Tizzy to the mountains with us but found she doesn’t travel well. A car-sick cat is fairly unpleasant for all concerned. Frankly, I think she didn’t like returning to a place that held some scary memories for her. And we’ve found we don’t mind a little break from the morning bloodletting, which means we can indulge in that fabulous perk called sleeping late. Heaven!