I’m borrowing from my favorite nerdy radio station again. Yesterday I was listening to PRX (Public Radio Remix on Sirius XM) and a segment came on about the long shadow cast by events in our lives. It was a heart-breaking story that I won’t retell, but it got me to thinking about what casts a shadow in my life. What experiences have left shadows, consequences, that cannot be escaped? 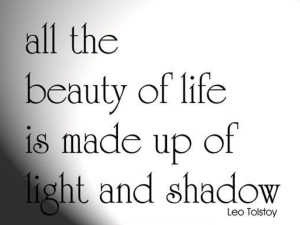 I’m entranced by that imagery…..standing in the shadow of yourself, someone else, a building, a tree…..we’ve all experienced it without much thought. It’s just a shadow. Yet have you ever tried to explain a shadow to a young child? What is a shadow really? By definition a shadow is: a dark area or shape produced by a body coming between rays of light and a surface. But a second definition is: used in reference to proximity, ominous oppressiveness, or sadness and gloom, as in “the shadow of war fell across Europe”.

When I think of the first definition it can certainly be a comforting experience. Resting in the shadow of a leafy tree or standing in the shadow of a loving parent. But that second definition gives me pause. OMINOUS, OPPRESSIVE, GLOOM, not words that bring joy, and in fact the opposite happens. Just reading those words leaves a sense of foreboding. As a country we have been cast in the shadow of many tumultuous events. Certainly wars; for my generation it was the Vietnam War. For my parents it was World War II, and for this generation it will be our conflicts in the Middle East. The threat of nuclear war is so ominous as to be almost unspeakable. And in my lifetime there are other dramatic events that have cast the long shadow: the Kennedy and Martin Luther King assassinations, the Space Challenger explosion, 9/11, to name a few. These shadows continue to darken our lives. These shadows have changed the course of history.

So what, personally, has cast a long shadow? Of course, most recently it is the loss of my childhood home to Hurricane Harvey. That event changed the course of our family history. We will mark our family story from that trauma. Divorce in my 30’s, a topic that still evokes a queasy feeling in my stomach, was a life-changing passage not just for me but for my children. I cannot escape the shadow of these particular circumstances. I must own them and accept that they are part of my story. But as I pondered this topic I realized that many times the gloomy shadows will give way to the leafy shadows, that sometimes one will lead to the other.

In my case I’ve already written about the silver lining to the hurricane in that it has brought my family closer in so many ways. My divorce eventually led to my marriage to Billy, who is the calm at the center of my storm. I now stand in the safe shadow of his love. (And hopefully vice-versa.) Our collective national tragedies usually lead to changes in laws, in relationships, in attitudes. At the very least we receive a wake-up call that forces conversation around hard subjects.

When I look one more time at the definition…..RAYS OF LIGHT…..maybe that is the entire point of a shadow. Maybe you cannot really understand the goodness of light until you have stood in the gloomy shadows. Even the sweet leafy shadows are a result of light, and eventually we must all have light to live. One day when my son was a little guy we saw the sun shining through the clouds creating amazing rays of light in the sky. This particular phenomenon is not possible without the clouds, the shadows. He deemed them a GOD PICTURE. Wow, out of the mouth of babes. To this day if I see such a sight I still think GOD PICTURE….the light we see through the long shadows. Let there be light. 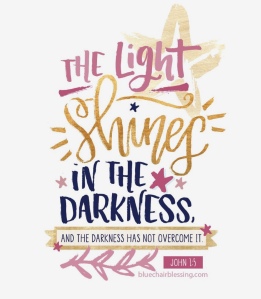